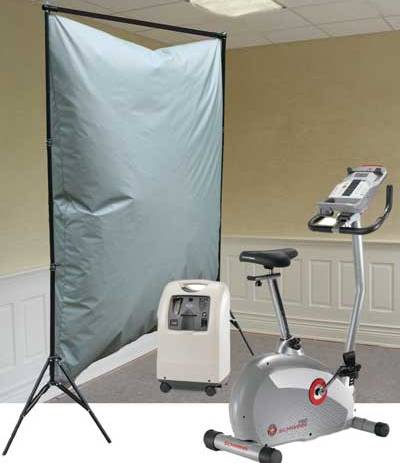 The therapy is called O2MT or Oxygen Multi-step Therapy. The #1 cause of all pain and disease is Lack of Oxygen!

Before I explain the therapy, though, we need to understand how oxygen gets from your lungs to your tissues. This gets a little technical, but it will help you understand why multi-step therapy is so crucial to effectively fight the aging process.

Atmospheric air pressure at sea level is 760 mm of mercury. Since oxygen comprises approximately 20 percent of the atmosphere, the pressure component of oxygen, called partial pressure, is 20 percent of 760, or about 150 mm. The air coming into the lungs, therefore, contains a pressure of O2 at 150 mm. However, in the lungs, the oxygen is diluted considerably with carbon dioxide leaving the body. Thus, in the air sacs of the lungs (alveoli), the pressure of oxygen is the 150 mm minus the partial pressure of CO2 (which is 40) for a net O2 pressure in the air sacs of about 100-110 mm. With me so far?

The reason this is significant is because when the blood carries the oxygen to the capillaries, the oxygen must dissolve in the waters of the body in order to reach the O2-thirsty cells beyond the capillary membrane. Unlike carbon dioxide, O2 is much harder to dissolve in liquids and its solubility is heavily dependent on the pressure driving it. Oxygen is extracted in the capillaries and when the blood comes out the venous end of the capillary, the average pressure of oxygen in the veins is about 40 mm early in life and drops to about 35 mm by age 70. The difference in the pressure of oxygen between the arterial and venous sides reflects how well the oxygen is delivered and consumed.

This is extremely important, as the most common complaint I’ve heard about multi-step therapy is from patients who have their blood tested by a conventional doctor who measures the amount of oxygen in the blood. When it comes back normal, people think they don’t need the therapy. What the doctor is missing is how well the oxygen is transferred to the cells.

When the oxygen pressure falls as you age, the volume of oxygen may stay the same, but you may be oxygen deficient because there’s not enough pressure to push the volume to a usable state. When your doctor tells you there’s plenty of oxygen in your blood, he’s correct. The blood is saturated with oxygen. Problem is, there’s not enough oxygen in your cells! You see, the body’s ability to transfer oxygen to the cells becomes damaged as we age.

This transfer of oxygen from the blood to the cells is perhaps the most significant underlying factor in whether you live a healthy life or not! The more damaged the transfer mechanism becomes, the more likely you will become ill. This is why you are more susceptible to illness as you age!

The breakthrough with multi-step therapy is that it actually raises the arterial pressure back to youthful levels. And what’s just as important is the effect is long lasting!

Multi-step therapy is surprisingly simple. All it involves is breathing high levels of oxygen while exercising. The higher oxygen level in the lungs creates a greater head of pressure to drive oxygen into the pulmonary capillaries. The exercise moves the circulation much faster, ensuring a greater oxygen carriage. Initially, the oxygen pressure in the veins rises, as more oxygen is getting through to the venous side, but it is this oxygen that allows the capillaries to repair the transfer mechanism. Once the mechanism is fixed, more oxygen can diffuse through the capillary wall to oxygen-thirsty tissues.

Typically, the multi-step therapy consists of a moderate aerobic exercise for only 15 minutes while breathing pure oxygen at 10 liters per minute. First, a nutrient combination is orally administered 30 minutes before the exercise starts. The combination consists of 30 mg of thiamin (vitamin B1), 500 mg Hawthorne Berries, and 100 mg of magnesium orotate. These agents help the uptake and utilization of oxygen.

Thirty minutes after taking the combination, you begin exercising while breathing oxygen using a mask and storage balloon at a flow rate ten liters per minute.

The effects of this treatment are far reaching for virtually every conceivable human condition. Not that this is a cure for anything, but by improving delivery of the most important substance for tissue life and repair, the body will have a much better opportunity to correct any problem.